Yesterday afternoon, I gave my first "real" speech concerning my writing. Previously, when I was interviewed on radio and television, I wasn't a bit nervous.....I just opened my mouth and the words flowed out. But, let me tell you, being the guest speaker, in front of an assembly of grade school students had my heart pounding and my hands shaking!

I had assumed I would be standing.....uh....leaning on a podium, with an intact microphone. That way I'd be able to shuffle through my notes and sneak a sip of my bottled water once in a while and feel at ease. That's not exactly what happened, though.

I was given a hand-held microphone and that was it! I asked if there was a podium and the answer was "Sorry, no". I stood there for a moment, envisioning myself fainting, due to the nakedness of just being "out there" with no protection, and toppling over in a heap on the gymnasium floor.

But, then I received a folding chair and an old typewriter table on wheels. I was set! It fit my size just right and I felt totally comfortable. As the children began to file in, I began to feel more at ease, especially when a few of the teachers came up to say hello.

I must say I did alright, because I was able to speak for my alloted time, and the students had tons of questions! I was so pleased about that, because I knew that meant they had been paying attention! The Q & A session even had to be stopped before everyone received a turn because time was running out.

Thanks to Sts. J & A School in St. Charles, Mo. for asking me to speak and I'm looking forward to more speaking engagements.

It looks as if the next one will be at Duchesne High School, in St. Charles, Mo. on Wednesday, April 22, 2009. I'll be speaking to all the English Literature classes about "believing in yourself and your dreams."
at March 27, 2009 7 comments: 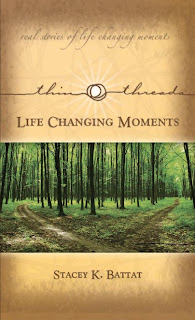 Introducing a fabulous new anthology, "Thin Threads". I predict great sales for this book and all future ones.

Stacey K. Battat is the President & Director of Inspiration.

Read about submission guidelines and contests by clicking on this link:

How many of you saw The Tonight Show with Jay Leno last night? I was thrilled to watch the very first time a sitting President made an appearance on such a TV program.

President Obama was cool, calm, and charismatic, as always. 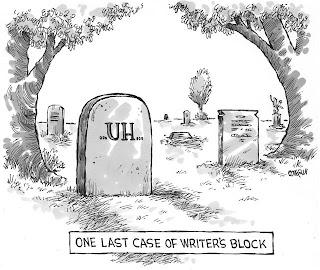 Hey Writers! Can we all relate to this?

I received permission from cartoonist, Dave Coverly, to post this hilarious cartoon on my blog. Enjoy!

It was published in the March 1, 2009 edition of Parade Magazine.

Tama J. Kieves is a "Harvard lawyer (who) left it all to have it all."

This is a fabulous book that I often go to when I need help with my insecurities and lack of confidence.

Tama walked away from her high income career with a New York law firm, to wait tables and explore her writing.

You can read Tama's free transformational guide on “Finding Your Calling Now” by going to her website at:

TITLE OF MY BOOK

For those of you that don't already know.....here is the title of the book I'm writing:

"That Crowbar Changed Everything!
.....Memories & Reflections"

It's part memoir and part observations of the world around me.

Please leave a comment and let me know if the title piques your interest!
at March 07, 2009 No comments:

I ATTENDED A WONDERFUL ST. LOUIS WRITERS GUILD PRESENTATION TODAY. PUBLISHED AUTHOR, BARRI BUMGARNER, GAVE US A MULTITUDE OF TIPS ON HOW TO MARKET OURSELVES AND OUR BOOKS, ESPECIALLY ON A SMALL BUDGET. EVEN THOUGH I KNEW ABOUT SOME OF THE THINGS SHE SPOKE OF, I LEARNED A GREAT DEAL, TOO. I CAN'T WAIT TO GET GOING ON MANY OF THEM!
at March 07, 2009 No comments:

PUTTING ANTHOLOGY ON BACK BURNER FOR NOW.

After receiving various comments about the title of my anthology, I've decided to put it on the back burner for now. Even though I still think it was a funny and catchy title, I realize it didn't come across the way I intended.

I hope no one was offended by it, because that was certainly not what I had in mind from the very beginning. It was just meant to be humorous and I thought 99% of women (those of us who aren't Twiggy thin) could laugh and relate to it.