Here's a photo of my wind chimes that I've written about. They hang right outside the window over my kitchen sink 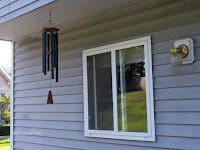 There's a song by Mike & The Mechanics called The Living Years that came out in the mid to late 1980's. It's about a guy who's at odds with his dad all the time. When his dad died, he wasn't with him, nor had he gotten around to telling him all the things he had to say..... (good things)

Every time I heard that song, it spoke volumes to me. It was during that same time that I had conflicted feelings about my dad. I wished things were different between us. I wanted to see him, but when I did, it was uncomfortable...for both of us. We didn't know what to talk about. We were strangers. We never reached the kind of relationship I so desperately wanted, but we at least reconnected the last couple of years he was alive. He knew I loved him and I knew he loved me.

The Living Years is on one or more of my playlists....maybe I'll add it to this newest one..... I think both the music and lyrics are beautiful.

Don't wait until it's too late to tell people how much they mean to you. Do it in the living years.
at August 12, 2009 2 comments: