I don't have any news to share about Scott. I guess I'll stick with the old saying, "No news is good news". I still feel myself barely breathing from time to time, and can only seem to perform mindless tasks around the house. Thus, dishes are getting washed (by hand!) and laundry is getting washed (by machine!)

I have lots of different things I've jotted down over the past week or so that I wanted to post on my blog. I decided to begin with some adorable Bunny Wabbit pictures! 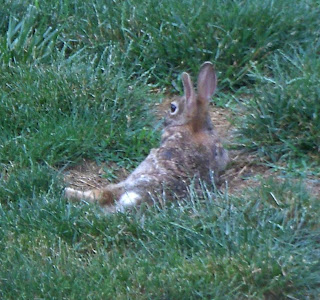 This first picture is one of our back-yard bunnies, stretched out and enjoying himself in a little patch of dirt, among the grass. This part of the yard is right next to our deck. 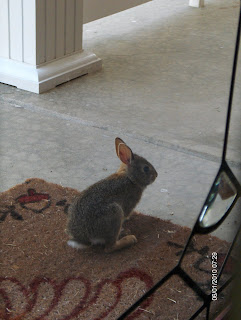 This little bunny is standing on our front door mat, right next to the front door! The glass is part of our storm door and I took pictures while hiding behind the front door. I took the pictures sideways, looking through the crack where the hinges are. (Hope that makes sense.) 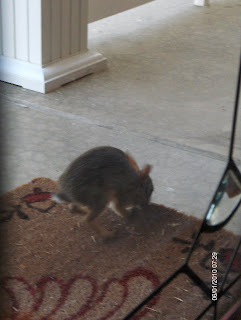 This picture is of the bunny biting at and trying to get pieces of the mat! I don't know if he was eating them, or wanted to take some "home". He was jumping and pouncing on the mat and really pulling at it with his teeth. It was hilarious! I also managed to get a short video of it, on the same camera, which I've been wanting to post, also. BUT, I took the pictures and video sideways, and for some reason, my photo program won't allow me to flip/turn a video, like it will a photo! Anyone have any ideas??

Animals never cease to amaze me and bring me such joy...even the squirrels who steal a lot of the bird seed we put out for our fine-feathered friends!