Thanks to all of you that left heartfelt comments and/or sent e-mails of prayers and well wishes.

The family member who had emergency surgery is my oldest son, Scott, who I'd just wrote about on Monday, the 21st. He is in England for business and I posted the photo of him visiting Stonehenge. 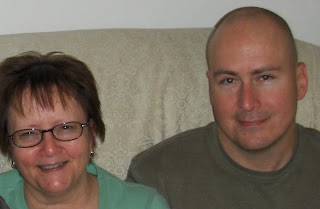 (Scott and me the day before he flew to England)
I'm not exactly sure of the time of events, but sometime soon after that tour at Stonehenge, he was rushed to a hospital for emergency removal of his burst appendix, which also resulted in having some gangrene.
That was all I knew for many hours, which was the reason for my intense fear. And obviously, with him being a zillion miles from home, made it all the worse.
This afternoon, Scott called me from his cell phone and we were able to talk for quite a few minutes. His voice was weak, but oh how wonderful it was to hear it and to talk with him! He wasn't sure when he was going to be released from the hospital, but thought it would be at least a couple of days from now. After that, he said he'll stay at his hotel and rest up until his already scheduled flight home, which is on July 1st.
His British supervisor has been so wonderful through all this, keeping in touch with Cindy, Scott's wife, and notifying her whenever he knew anything.
I titled this post "A Cautious Sigh of Relief" because although it appears that Scott's surgery was successful and all the gangrene was removed, I won't be able to actually sigh with relief and/or breathe properly until he is safely back at home.

(*Note to Chatty Crone. Yes, I am indeed Scott's mom. I was a mere child when I was married the first time, so I was a very young mom!)