Okay...here is the explanation about Green Kitty's name! (At that time, various stray cats were coming to our front porch to eat food we put out for them, and some of them liked it so much they hung around a lot.) The other cats/kitties that visited much be feral cats because they've never let us get very close to them. We have a new little family that we're trying to get close and pet them, because they are adorable and we'd love for them to be adopted.)

Ron and I gave all the stray kitties various names so we'd know who was who! The guy below is Green Kitty. Then there was White Socks because he was mostly all black except for white on all four legs, that looked like socks.

Another visitor! We call this guy Green Kitty, because of his tiny green collar with a tiny bell. We found out he had an owner who moved away...and just left him! 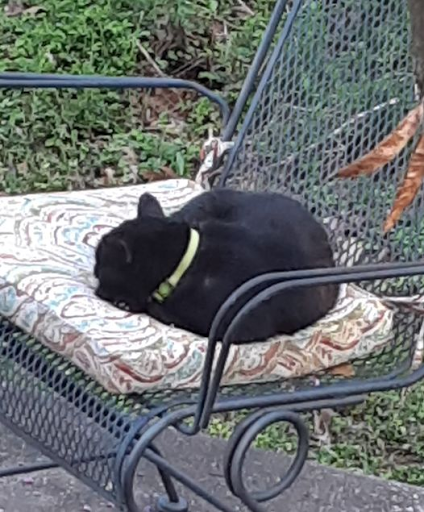 This was taken in April. We took him in soon after that.
He is so much fun! Ron and I are amazed we have a kitten in our house
Oh, and we bought him a new green collar !
P.S. So, this is why I mentioned to Stephen T. that he would never guess about the name! :)
at July 18, 2021 10 comments: