I'm almost certain that I've blogged about the memoir A Girl Named Zippy, by Haven Kimmel, but I didn't see it listed in my Labels. It's possible I wrote about it before I started using labels, because I didn't know what they were or how to use them until about two years ago!

So, anyway.....When A Girl Named Zippy was first published in early 2001, I bought the hardcover. It was displayed in the New Books section of my favorite indie book store, Main Street Books, in St. Charles, Missouri. The store was still at its old, and I think original, location. Sometime soon I'll do an entire post about the store and a little of its history.

I bought it for the same reasons I choose any book, whether I'm buying it or borrowing it from the library:

1) The cover really caught my eye. I mean, really....look at that adorable face!

2) I read a bit of the first page or two and flipped through it, noticing the photos.

3) I liked the writer's style, her voice.

I don't remember if I read "Zippy" before or after May of 2001, but it was somewhere in that time period. Why does that matter? My estranged dad became very ill in May 2001 and wasn't expected to live. I went to see him and when I got home, my feelings just flowed out of me and....long story short.....I realized I was a writer. I discovered my passion at the ripe old age of almost 50.

The entire time I read it, I kept thinking, If I wrote a memoir, it would be like this!  I was definitely not comparing myself or my writing in any way to Ms. Kimmel. Not at all. What I meant was the small town life, the little adventures of a young girl who had a couple of much older siblings, the similar era although I'm older, and the use of B&W photos. Reading that book prompted and inspired me to write, and not only to write, but to submit my writing.....without fear. I owe so much to little Zippy.

As I get closer to finishing my first book, a memoir, my excitement builds. My book cover hasn't really been discussed much yet, but I'm leaning toward something like this: What do you think??

From Pigtails to Chin Hairs
A Memoir & More 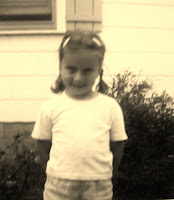 
Finally, I'm so excited about a package I received yesterday from Amazon.com. (Yes, I shop at various book venues.) I've never listened to an audio book before, but when I heard about this one, I just had to have it. (P.S. I got it from one of Amazon's vendors and it is brand new, still in plastic wrap. The retail price on it is $26.95, and I got it for less than $10.00, including shipping.)