* Writers Make the World Go 'Round *

Two nights ago, I watched a fascinating interview on TCM - Turner Classic Movies. The actor Peter O'Toole (79 years old) told riveting and charming stories of his life before and during his stage and screen career. He's probably best known for his role as writer, T.E. Lawrence, in Lawrence of Arabia. Mr. O'Toole recounted hilarious tales about himself and one of his co-stars, Omar Sharif, during the filming of the famous "charge" scene, and how both tried to stay in the camels' saddles. (Can you believe they didn't use stunt men?) He talked at length about his various roles and co-stars and was highly entertaining. 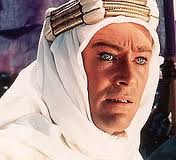 (age 79 - 2011)
Toward the end of the interview, Mr. O'Toole spoke about his writing. He's written two memoirs; Loitering with Intent: The Child and Loitering With Intent: The Apprentice. He said he is working on his third book, but didn't specify what it was about. But, he did say this about writing:
I love it, the writing process, but I don't have to like it. It's so frustrating. You feel you've written rubbish and you tear up the papers and walk around the room in circles. But it's a love affair. I like getting down there and putting on to paper. I never wanted to write until I was 40 or 50.
I didn't use quotes with the above, because I'm sure I don't have it verbatim, but it's very close. I especially enjoyed learning he didn't think about, or want to write until he was "older." I'll definitely check out his memoirs. If his writing is anywhere near as marvelous as his acting, then he's been given more than one precious, gift of talent.
One more thing. Sometimes we forget that although it takes a very good/great actor to create extraordinary performances.....none of it can happen without superb writing.....Writers make the world go 'round.....
* Also.... Welcome to my newest follower, Karen. I hope you'll stop by often and always enjoy what you read and see! Thank you! *
"Writing is a kind of performing art, and I can't sit down to write unless I'm dressed. I don't mean dressed in a suit, but dressed well and comfortably and I have to be shaved and bathed." - -- Peter O'toole
﻿
at April 13, 2012 15 comments: