Vern, The Iditarod, and Me

Today, after I got home from the Tuesday morning Coffee & Critique (writing) group, which also included staying afterwards for a fun (and yummy) lunch with five of my gal pals, Vern was really ready to go outside.

He loves to go on his daily walk with me and it usually happens sometime around noon. (Today it was after 2:00pm!) When it's quite a bit later than that, he almost literally drags me along the first few yards.....and I'm grateful for that because it's a slight incline and I don't mind the help! 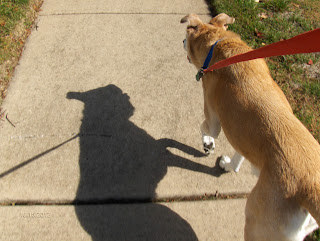 This picture isn't from today but this is a good example.

As he pulled me along, he looked like he was really working hard, tugging a heavy load behind him! It was then I thought about him running in The Iditarod and it made me smile!

"Progress has little to do with speed, but much to do with direction." -- Unknown