Such a busy, rainy day today. First I went to my "Coffee & Critique" group in the morning. Then I ended up spending way too much time on what was supposed to be a simple, one-stop errand. Don't even ask.

By the time I got back home, poor Vern followed me around and pleaded with his eyes. He loves to go on our walks. Fortunately the rain had stopped and it was only misting. But it was cold outside. (Baby, it's cold outside.... ♪♫ ) I bundled myself up and put his new sweater on him. Have I even mentioned that? I don't think I have. Although I'm a dog lover, I used to scoff at people who dressed their dogs in any kind of clothing. But, I discovered that Vern actually does get cold.....so voila'! 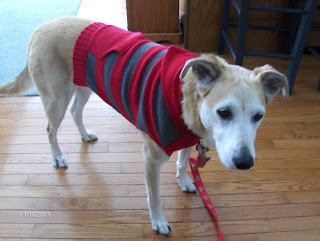 (photo taken by Becky)
I think he needs a bigger size! I'm not sure since I don't know how a sweater should fit a dog. I do know that I have to giggle because he reminds me of Porky Pig. Remember how he always wore just a shirt and NO PANTS?! What's up with that?

(courtesy: google)
But Vern seems to really like his sweater, and he lets me put it on him with ease. Have I mentioned how much I love this dog?? Every time we go on our walk, I think, We may have saved his life, but he's also saved mine, to an extent. I've mentioned the weight I've lost, mostly due to walking, which should also effect my cholesterol in a very positive way, etc. I expect to live to be 100!