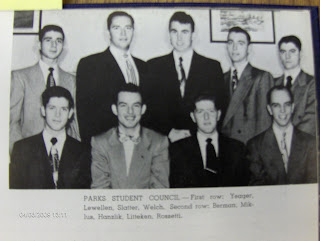 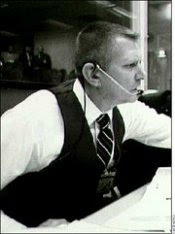 I had a wonderful visit today at Parks College, part of St. Louis University, in St. Louis, Missouri. Parks College is a very interesting and important part of the aviation history of the United States.

(I have a special interest in it, because my dad, James Lewellen, attended college there and stayed on to be a professor for approximately 7 years. It was originally located in Cahokia, Illinois, a small town across the river from St. Louis. Mr. Parks bought the land there because it was flat and affordable!)
**Note: April 10, 2009. I inadvertantly forgot to mention and thank Jim Bennett, Class of 1951. I found his name listed on the Parks website, while browsing in the Alumni Board section. I e-mailed Jim, explaining my interest in Parks due to my dad's years there as a student and a professor. He immediately responded and we've e-mailed each other quite a few times. He is the reason I met Susan Bloomfield, by forwarding my inquiries to her. Such kind and thoughtful people....that's what Parks College was all about way back in the beginning years...and still is today in the 21st Century!**
After my visit with Susan Bloomfield (Development Director Parks College of Engineering, Aviation and Technology, Saint Louis University)which included a personal tour of the Parks College Tribute Timeline....she then took me to the University Archives where Randy McGuire was so kind and helpful in digging out yearbooks that might have had some photos or information about my dad. I found a few in the 1952 yearbook....the year he graduated with a Bachelor of Science Degree in Aeronautics.
**So that's where my son, Mark, acquired his math genes!!**

Please visit their website and learn about Parks College and the graduates who played very important parts in aviation...from WWII on to NASA.
www.slu.edu