Okay.....it appears as if Blogger has repaired the "comment" problem. It still doesn't show the correct number of comments at the very end of the post, but when you get into the comment section, it does.
*Does that make any sense at all?!*  3:00 pm CDT 7/6/10

It's "Tea Cup Tuesday". I'm joining Martha's Favorites and Terri's Artful Affirmations and Lady Katherine's Tea Parlor. Thank you so much for inviting me to share my tea cups!

I'm truly excited to show one of my recent finds at the Antique Mall near my home. I think this particular set is so unique. First of all, it's not pink! It's a lovely golden yellow, on a white background, trimmed in gold. 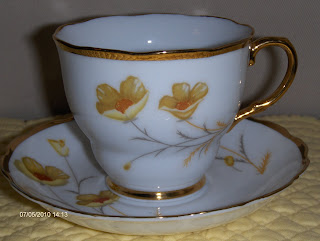 Also, the edges of both the cup and saucer are slightly scalloped, which adds even more beauty, I think. 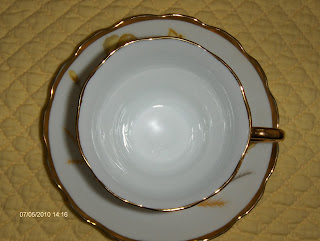 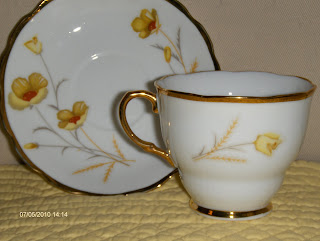 The "back" side of the cup has just the one flower bud . 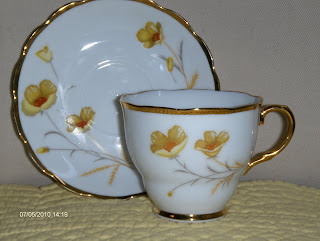 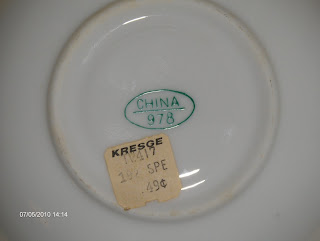 THE BOTTOM OF THE SAUCER STILL HAS THE "KRESGE" PRICE TAG OF 49¢
Isn't that hilarious?? I think if I were the owner, I would've removed that before I attempted to sell it! How many of you are familiar with the old Kresge stores?? We had them in St. Louis when I was really young. They were similar to Woolworth's.....kind of a small discount/department store, before there were K-Marts and such. (I think the same man, Mr. Kresge, also owned K-Mart.)
I paid $4.99 for the set, but I would've paid a lot more, just because I loved the old-fashioned price tag!!
"The mere chink of cups and saucers tunes the mind to happy repose." -- George Gissing
at July 05, 2010 24 comments:

Recently I mentioned that I wanted to post several Calls for Submissions. I usually stumble across various websites and don't remember how I even landed there. This morning I took the time to go through one of those sites, which posts tons of magazines. The main site is: Bella Online; The Voice of Women. It lists magazines from A to Z, with a little something for (almost) everyone.

Every now and then, with these types of sites, there are sometimes errors in the URLs listed, or the publication will no longer be around. Then I usually check the name in Google and see if I can find it there.

I have checked all the ones listed below, scanned the submission guidelines, and read that they are paying publications. Some also are looking for photography submissions. During my "speed reading", I tried to catch any words that might hint that the site could possibly be offensive to anyone, so hopefully I did a good job! I didn't bother with any that only paid something like $10.00 per article.

As always, I am not affiliated with, or being paid anything for listing these sites. I just do it out of the kindness of my own heart!!  ☺


http://www.romantichomes.com/  (I couldn't find a "writer guidelines" on this, but maybe y'all can!)


(I'm a little partial to Chicken Soup for the Soul, since I've had stories published in their books!!...AND just recently had a story accepted by Patchwork Path for an upcoming book of theirs! )