Earlier in my blog I wrote about my dad, James Lewellen, who graduated from Parks Aeronautical College in 1952, and also about Gene Kranz, graduate of 1954, who went on to NASA and had a major role in getting the astronauts safely back home during the Apollo 13 crisis.

I just discovered that my dad also had a very important role in NASA's history. He worked at Cape Canaveral during John Glenn's 2nd flight in 1998. (The comment around some family members' houses at that time was: "Who's older? Dad or John Glenn??")

It appears that dad was one of the few remaining computer guys around that could "read" old computer language and translate it into the modern. He moved around his desk and work areas on a scooter of some sort, because his health was already deteriorating.

Even though his body was slowing down, his mind was still brilliant.
at April 29, 2009 No comments: 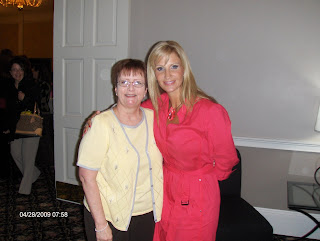 Yesterday morning was the Kick-Off breakfast for the St. Charles County, Habitat for Humanity, "Divas Building Dreams" program....(Wow, what a mouthful that is!) It was an amazing morning. Kelly Brooks, Development Coordinator should be commended for all her work!

(We "divas" will be building a home this summer for a well deserving single mom and her young daughter. The tentative work schedule as of today is: Pouring of foundation, etc. on May 4, 2009, to Dedication Ceremony on August 30, 2009.) http://www.habitatstcharles.org/ There's still time to join!

The keynote speaker was Brenda Warner, wife of NFL quarterback Kurt Warner. She gave a wonderful speech about her life as a young girl, to her hard luck days as a single mom, to her extraordinary life now. She was so gracious and stayed afterwards signing autographs and having her picture taken with divas. I also gave her an autographed copy of "Chicken Soup for the Soul; Love Stories" with a bookmark in my story's page telling her it was because she and Kurt had such a wonderful love story.

She and Kurt sponsor "Kurt Warner's First Things First Foundation" which helps many people in many ways. Please check out their website http://www.kurtwarner.org/
at April 29, 2009 No comments: