* Beautiful Moments Need Not Be Expensive * 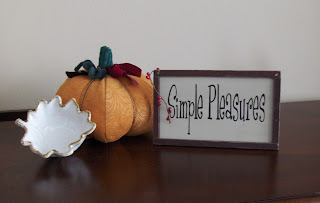 This kind of says it all, doesn't it?
I just realized this morning that I missed my 2 Year Blog Anniversary by two days! I began blogging on November 10, 2008, after much ﻿persuading and urging by writer-blog-friend, Karrie Mcallister. She helped me realize that I did indeed need a blog. Karrie even helped me get started on blogspot...all the way from Ohio. Yay for e-mail! I'm sure other writer friends told me about blogging, too, but Karrie was the catalyst.
Thanks again, Karrie! I owe ya! 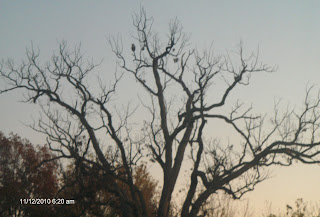 Remember when I posted a picture of this old tree recently? I mentioned that's where we see an owl or two from time to time. Well.....I know it's very hard to see, but at the top of the tree, a little left of the center, is one of those beautiful birds! I actually took this picture from my office window this morning, holding my camera between the slats in the blinds. I zoomed as close as I could (not the best camera for long shots!) and used the "no flash" feature. If you click on this, though, you'll see a huge view.
What prompted me to look out the window was I heard the familar hoot-hoot that I hear so often! The last time that happened, by the time I went and grabbed my camera, he had flown away.
More Simple Pleasures! 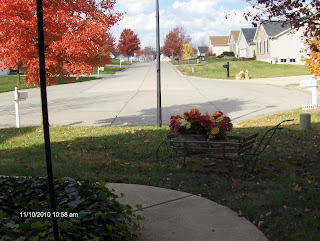 Tiger-Gal's view when she lays by the front storm door. 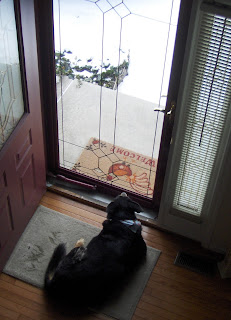 She LOVES to lay there and keep a watchful eye, and/or snooze and I LOVE to watch her, too.
More Simple Pleasures! 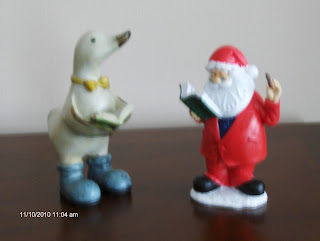 Two Guys With Books!
I bought the little duck for a couple of dollars earlier this year at a place called Apple Wagon. It's located in Williamsburg, Missouri, which we pass when we drive to Osage Beach, Mo. He was just so cute, standing there holding his book...and me being a book person...I just had to have him! I didn't think any more about it....as in maybe having a "collection of book holding animals and/or people"...until I saw old Santa there, at Dollar Tree! Well, you know I had to buy him, too. So, I guess since I have TWO of them, I've officially begun a collection!
More Simple Pleasures!
"The simplest things give me ideas." - Joan Miro
at November 12, 2010 32 comments: