Classic TV and a Ridiculous Warning

CLASSIC TV
You get what you pay for! I found the DVD pictured below at Dollar Tree, probably at least 2 years ago, put it with the rest of the DVDs and never got around to watching it....until, that is.....Friday night. For the mere price of one dollar, this little gem contains three "classic" television shows from the 1950s. If you think you see Betty White on the cover, you are correct. She and the actor with her (Bill Williams) were in a short-lived TV show called A Date with the Angels. (Don't you just love Betty White?? I hope I'm still doing what I love and still enjoying life as much as she is when I get to be her age!) 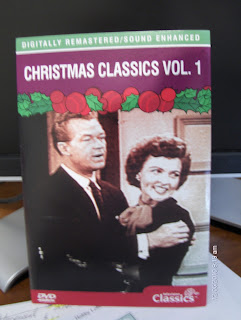 They played Gus, an insurance salesman and his new bride, Vicki. They aren't "real angels"....that's their last name. Gus and Vicki Angel. If you're a baby boomer and have never heard of this show, don't feel bad. I'm a 1950s TV junkie and had never heard of it, either. Probably because it only lasted one season. Anyway....this particular Christmas episode, Santa's Helper, was really cute and typical of a 50s TV sitcom. Besides the two main actors, the guest stars are very recognizable actors, too: ﻿Burt Mustin, Richard Deacon, and Nancy Kulp. Very cute episode, which I just discovered can also be seen on You Tube.
The other two shows on the DVD were truly awful, in a hilarious sort of way. I won't even go into them, because it would take up too much room!
A RIDICULOUS WARNING 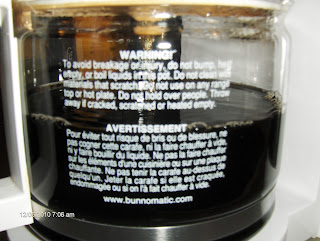 The Ronald and I have owned a Bunn coffee maker for a couple of years, but I never took the time to read the Warnings on the carafe until this morning. (Why, you make ask? Well, I just assumed I would know all the wrong, bad, stupid things a person should NOT do with a glass carafe.) Ahhhh, but I was wrong! I did not know this particular one: "Do not hold over people." Wow! Thank goodness they put that important message on there! OMG! Now I know not to hold it over people!! BUT, do they mean while it is empty? Full of hot water? Full of cold water? Full of hot coffee? And do they mean "don't pour it over people's heads? Or do not threaten to break it over people's heads? I just don't get it.... I think we people who buy coffee makers need to have the warnings spelled out a little more clearly! I don't want any accidents to happen, because I wasn't cautioned properly.

“I am so busy doing nothing... that the idea of doing anything - which as you know, always leads to something - cuts into the nothing and then forces me to have to drop everything.” -- Jerry Seinfeld
at December 06, 2010 20 comments: