Steve explained his reasons for writing Megan's story the way he did. He didn't want it to be the typical "Who, What, Where, When, Why & How" kind of newspaper article. He began it with the happy words Megan said to her mom about a new boy who was nice to her on My Space. His title did not include any words about suicide the way the online version does. I apologize for not remembering the title in the print version Steve brought with him. I should've written it down. He also spoke about his decision to not print the name of the neighbor who was involved in this horrible tragedy. She had a daughter Megan's age, who was once Megan's good friend, and he didn't want his article to possibly cause her to end her life, too.

There are several reasons why I enjoyed Steve's presentation. One, I haven't heard a newspaper journalist speak since I attended my first Missouri Writers Guild Conference in April of 2007. I find it so interesting to hear the ins and outs of writing columns for a paper, which is obviously much different than writing a book.
I enjoyed learning of his integrity, especially in today's world of Junk Journalism and the sick delight some people feel when they read about others' troubles. Thank you, Steve. It was a pleasure meeting you. 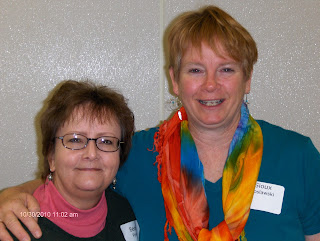 My buddy Sioux Roslawski agreed to be VP of Saturday Writers.
Yay, and thank you! (By the way, I'm the short one!)
(Boy, do I look like my mother in this picture! Scary!) 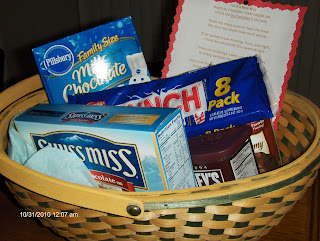 I won this awesome basket of chocolate goodies at the raffle.
I squealed and ran up to receive my prize as if I was on The Price is Right.
I didn't think to photograph it before I ripped off the pretty cellophane wrap!
Uh...I think there's a couple of things missing, too.
It was donated by the amazing Barb Hodges complete with one of Barb's poems! 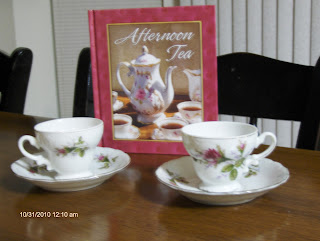 Speaking of amazing Barb, she presented me with a little gift bag yesterday, which held these two adorable tea cups sets and Afternoon Tea book! What a sweet woman! I asked her why she was giving me a gift, and she said, "Just because". She went on to say how much she enjoys seeing the tea cups I post on my blog from time to time. Whenever I see her, she is a joyful, blissful woman. Thank you, Barb! 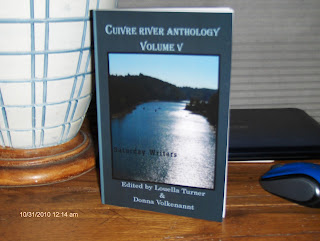 One more thing...Lou Turner of High Hill Press, worked night and day to get some brand new Cuivre River Anthology, Volume V books to our meeting. Isn't the cover beautiful? And look how nicely it blends in with my blue and white table lamp and blue mouse! Pat Wahler, Sioux Roslawski, Donna Volkenannt, Lou Turner and I all have a story or poem in it. I'd be happy to get their signatures, if anyone would like to buy a book or two. They'd make nice Christmas gifts! hint...hint
There are many other writers's stories, obviously, but these are the ones who have blogs or a website that you may be familiar with. The books are $16.95 and I will ship them anywhere in the US at no charge, to anyone who buys them from me. What a deal! A book with many autographs, and shipped free!
And I'll be happy to get as many signatures as I can, if someone would prefer that.
If you are interested, contact me at: Writergal53@aol.com.
﻿
P.S. I'll post my terrible poem at a later date. I don't want THAT to be what sticks in your mind, when you think about buying a book which contains a story of mine!

The Saturday Writers workshop on October 30, 2010 was a huge success. We had two wonderful speakers; Susan Swartwout, publisher of Southeast Missouri State University Press, and Big Muddy: Journal of the Mississippi River Valley. And, Steve Pokin of the St. Charles County Journals. Both were very personable, answered questions, and seemed to enjoy us as much as we did them.

Susan spoke about the proper ways to submit your writing, whether it be a manuscript, essay, short story, or a magazine article. It was suprising to hear how many writers just don't do it professionally and totally ignore a publication's requirements. She had us laughing over some of the ridiculous things she's come across as an editor and publisher. One big note: If you're also a scrapbooker...DON'T stamp cutsie things all over your paper! Be professional.

At the end of her session, she had us participate in a poetry writing exercise. I won't go into all of it, but it was fun and there were some wonderful poems written. I tried to get her to accept mine to share with other classes, as an example of either How To Not Write a Poem....or Winner of the Worst Poem Contest. I could see in her eyes, she seriously considered it. Since she didn't, I'll post it at the end. (By the way, I apologize for not having a photo of Susan. I forgot to take pictures during her presentation. The link I provided, though, goes directly to a page all about Susan and contains a great photo.)

Steve writes a column titled, "Pokin Around". How perfect is that? How'd he get so lucky to be born with a name to go with his column?! His are human interest stories. The link I provided above is a good example of what he writes. I was happy to see this article, because just a week ago, I drove past the "tree" in his story, and wondered What the heck? (I am one who thinks it's a great tree.) 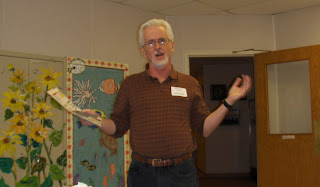 Steve was also the journalist who broke the story about Megan Meier, a St. Charles County teenager who committed suicide after being the subject of a cruel hoax on My Space in 2007. Steve brought copies of that edition and talked about his interviews with Megan's grieving parents during that time. His story was like the shot heard 'round the world. Surely no matter where you live, you've heard the extremely sad story.