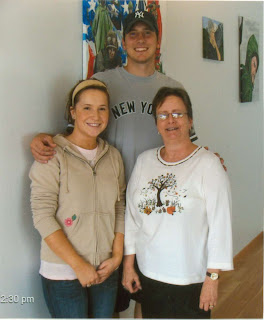 I was digging through some of my various boxes of old photos last night....(I am not at all organized when it comes to my photos!)....when I found these. I spent a couple of weeks in Iowa in September of 2008. I visited my brother and sister-in-law first in northern Iowa, and then my cousins in Greenfield. This is when I actually met Ray and his wife, Maria. (I had heard of him for years, and about his painting of The Rock, and other murals in the town.)
I'm the one on the right, in case you can't tell....the one having a very bad hair day and looking as if I'm wearing a maternity top!! Acckkk!! Believe me, if I had a better picture of myself with them, this one would not be posted on my blog!

Aren't they just the cutest couple? They look like they're 16 years old!! This was taken inside their newly opened studio. 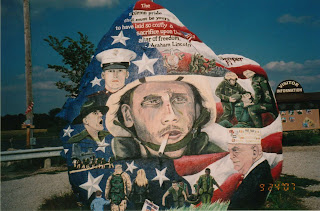 This is what The Freedom Rock looked like in 2008. Every Memorial Day, Ray repaints it with different patriotic images and sayings...honoring the military, both past and present.
So, in little over a week, there will be new images, on both sides, and actually all around the rock. It really is impressive.
** Ray was interviewed on the Fox Channel yesterday morning, and you can watch the video on the Sorensen's blog.   He was intervied via satellite from the TV station in Ames, Iowa. BUT, they left out the best part....that The Freedom Rock is right outside of Greenfield, Iowa!! It seemed to me as if they implied it's near Ames, which is about 100 miles away.
"I like to see a man proud of the place in which he lives. I like to see a man live so that his place will be proud of him". -- Abraham Lincoln
at May 20, 2010 13 comments: