How many remember the Fractured Fairy Tales? It was a segment on the Rocky and Bullwinkle TV Show, in the 1960's. That cartoon show was a classic! I guess it was meant to be geared toward children, but the humor was really hip! Each one was loosely based on a "real" fairy tale (isn't that an oxymoron??), but was slighty fractured! 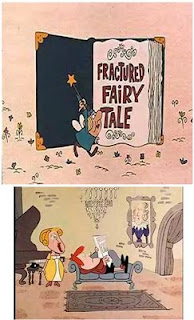 That's what popped into my mind when I thought of a title for today's post. Yeah, my mind works in funny, fractured ways sometimes....groan!

Today was fractured because:

a)  My son, Scott, spent another night in the hospital last night, due to pains and swelling in his abdominal area. I didn't know much for over 24 hours and was quite frantic, to put it mildly. Turns out it's still issues from his ruptured appendix and resulting surgery in June. More tests were done, and so I (guess I)  feel better about it all.....for now, anyway.

b)  Today was my mom's birthday. She's been deceased since 1989. I'm so glad she was able to see Mark a few times before she died. She lived in Iowa and we drove there a few times and she traveled here a time or two, also. She would've been 95 years old today.

c)  I'm really perturbed at AOL. It seems they have decided to LIMIT some of the e-mails we AOL users can send, in a given amount of time! I first noticed it yesterday, when I tried to send an e-mail, I received the following error message: You are blocked from sending email messages. See KW:RATE LIMITS for details.  And, of course, I immediately thought, Huh?...Well, that's obviously a mistake. I'm not on any kind of rate limit on my Aol account. But, when it continued, I put my mail in the "Send Later" folder. After a while, I could go into that folder and click "Send" and off it went.  BUT, this evening, after attempting to send 5 different e-mail.....mostly my "thank you for your comments on my blog" e-mail,  I decided to see if I could find the "rate limits" info. Long story short.....(I know, it's already too long)......It has to do with some kind of spam problems associated with Aol Instant Messaging and Chat Rooms. (which I don't even use)  I then contacted AOL through their Live Chat System and after the usual niceties was told, quote: "Meantime, if you really need to send mail I strongly suggest to use the AOL webmail.On the Internet Explorer address bar please typehttp://mail.aol.com/lite
Sign on with your AOL screen name and password to send the E-mail."

WHAT?? If I wanted to send mail that way, I wouldn't have AOL! Acccckkkkk!!!  I have a new abbreviation for them......SOL
“We have no reliable guarantee that the afterlife will be any less exasperating than this one, have we?” -- Noel Coward
at August 06, 2010 18 comments: