It's time for another Friday, "I Wonder" communique'.

(graphic courtesy Rose Petals from Heaven)
1)  I wonder why some people have the kind of  mathematical brain that makes it easy (and fun) for them to work on those never-ending, xyz kind of problems...... 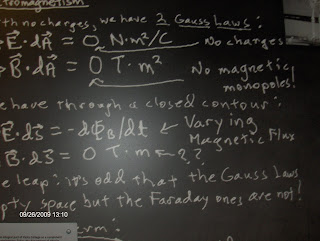 (photo taken by Becky at Parks College 2009)
.....and then there's people like me, who run screaming at the sight of any "math" equation that contains letters and other funny-looking signs. I.just.don't.get.it.

And that would most likely explain why I'm a writer!

Part of my adventure yesterday was driving my son, Mark over to Cahokia, Illinois (not to be confused with Cahokia Mounds. Two totally different places!) Cahokia is a small town just across the Mississippi River from St. Louis. Cahokia Mounds is a state park in Collinsville, Illinois, approximately 10 miles northeast of the town of Cahokia. Very confusing for some people.

Long story short: My dad was first a student and then a professor at Parks Air College, which was located there for many years. HE definitely had the math brain. He taught kinetics, which I'd never heard of and had to look it up in the dictionary. Hmm...well, it's some kind of math dealing with forces and motion, etc....has to do with planes and pilots! 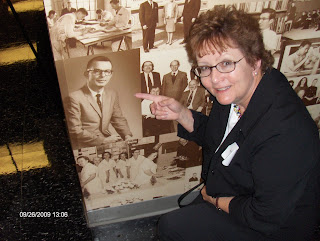 (photo taken by The Ronald at Parks College 2009)
(I'm pointing at a photo of my dad that I supplied)
First we had lunch at Oliver's which is located at St. Louis Downtown Airport. (Another confusing name! It's NOT in St. Louis, nor is it DOWNTOWN!) Check out their website. The food was really good and we saw small planes land and take off. I just noticed on their site that they have some sort of helicopter dinner tours! Sounds fun!
Anyway...for some reason, it had never occurred to me to show Mark the house I lived in as a little girl, my old grade school, church, etc. We also drove past the old location of Parks. Then it was on to the SLU (St. Louis University) campus on Lindell Street in St. Louis, which has been home to Parks for a few years. (That's probably more info than anyone cared to know!)
Although I've felt various emotions over the years concerning my dad, I'm still always proud of him for his Parks College years and the family life we had way back then. It was truly a wonderful life.
"Failure is not an option." -- Gene Kranz 1954 Parks College graduate. Portrayed by Ed Harris in the movie, "Apollo 13"
at June 17, 2011 15 comments: