Yesterday was Yogi Berra's 90th birthday! What an amazing man he was and still is. Although I never really saw him play baseball, (partly because of the years he played, but mostly because my family always watched the St. Louis Cardinals' games), I know he was extremely talented. And he IS from St. Louis, ya know! The Hill. 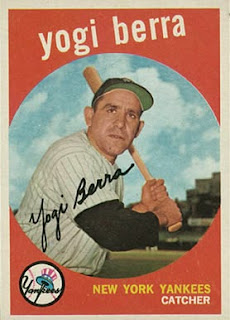 Below are some of the "Yogi-isms" I came across that aren't all that well known...at least to me, and you know what's the funniest thing about them? They all make absolute sense to me!
“Always go to other people's funerals, otherwise they won't come to yours.”
“I usually take a two hour nap from one to four”
“Cut my pie into four pieces, I don’t think I could eat eight.”
“Never answer an anonymous letter”
“We made too many wrong mistakes”
“The future ain’t what it used to be”
“If the world were perfect, it wouldn’t be”
“If the people don’t want to come out to the ballpark, nobody’s going to stop them”
“If you don't know where you are going, you'll end up someplace else.”
“You can observe a lot just by watching.”
“Nobody comes here anymore, its too crowded”
“90% of the game is half mental.”
“I wish I had an answer to that because I'm tired of answering that question.”
“Half the lies they tell about me aren't true.”
“I never said most of the things I said.”
“Okay you guys, pair up in threes!”
“I'd give my right arm to be ambidextrous.”
“You wouldn't have won if we'd beaten you.”
“We're lost, but we're making good time.”
“A nickel ain't worth a dime anymore.”
“It's tough to make predictions, especially about the future.”
“I'm not going to buy my kids an encyclopedia. Let them walk to school like I did.”
“If you ask me anything I don't know, I'm not going to answer.”
“You have to give 100 percent in the first half of the game. If that isn't enough, in the second half, you have to give what's left.”