People tell me I've been through a lot the past couple of months. I really hadn't looked at it that way, especially because of the sorrow and sickness some of my friends have been experiencing lately. But, however, all the worry and tension and grief that I thought I was "handling," hit me when I let my guard down, and it finally took a bit of a toll...

And now...I'm working my way back...to myself. And it feels really good to smile and laugh and be goofy again J

As I skimmed through Facebook this evening, I was shocked and saddened to read that my dear writer/friend Cathy C. Hall's husband just passed away. I am still in shock because I had no idea he was ill.
Cathy always referred to her husband, in both speech and writing, as "the beneficent Mr. Hall." I asked her a long time ago why she did that and she replied because he was such a compassionate and big-hearted guy....
In July of 2011, I had the pleasure of visiting with Cathy C. when I traveled to the Atlanta, Georgia area to visit family. Her lovely husband was kind enough to drive her quite a few miles to meet with me one afternoon. Cathy and I talked and laughed like we'd known each other "in person" for years and years. Although it was much too short of a visit, it will always be a favorite memory of mine. 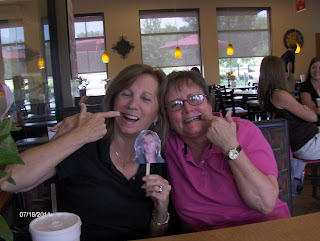 I'm so glad I was able to meet "Joe-the-beneficent-Mr.-Hall."
He took this and a couple other photos of Cathy C. and me that day
acting like our usual, normal selves!
(Oh, and she also brought along Cathy-on-a-Stick!)
I've included Joe Hall's obituary below:
﻿

Joe was born in Sandersville, Georgia and graduated from Washington County High School, before he received a Bachelor of Arts in Journalism from the Henry W. Grady School of Journalism at University of Georgia.

He had a life-long passion for music, and he pursued that passion through a ten-year career in radio as DJ, Dave “King Kong” Kelly. While working at WNEX in Macon, Georgia, Joe met his wife of thirty-six years, Cathy.
Joe left radio to work for TV Guide and moved to Lilburn, Georgia. He spent the next twenty-five years in magazine distribution, retiring recently as Director of Distribution and Marketing at CoMag with Hearst Magazines. He was kind and humorous and always put the well-being of his family before his own. He was an exceptional father, brother and husband who will be greatly missed.

There will be a Memorial Service to Honor and Celebrate the Life of Joe K. Hall at St. John Neumann Catholic Church, Lilburn, GA, on Thursday, June 23, 2016 at 11:00 AM. Fr. Sunny Punnakuziyil will serve as celebrant of the service. The family will receive friends on Wednesday, June 22, 2016 from 6:00 PM until 8:00 PM at Tom M. Wages Snellville Chapel, Snellville, GA. In lieu of flowers, please remember Joe with a contribution to your favorite charity or St. Vincent de Paul

Condolences may be sent or viewed at www.wagesfuneralhome.com. Tom M. Wages Funeral Service, LLC, “A Family Company, Snellville Chapel 770-979-3200 has been entrusted with the arrangements.

"Each friend represents a world in us, a world not born until they arrive, and it is only by this meeting that a new world is born." -- Anais Nin
at June 20, 2016 9 comments:

The past few days I've been thinking I really should post something new here, but as I sit with my fingers poised over my keypad, I realize...."I got nothin'."


I'm not bursting with information I want to share.
There hasn't been anything exciting going on.
Life is okay....
at June 14, 2016 10 comments:

Email ThisBlogThis!Share to TwitterShare to FacebookShare to Pinterest
Labels: Life, news, nothin', nothing

I brought Ron home a couple of hours ago. He'd been in the hospital since the morning of June 1st. I'm so happy to have the love of my life back home with me.

* I'M HANGING IN THERE, AND STAYING STRONG *

Can you believe it is already June 2016?
I don't know why, but it seems to be part of human nature that as every month and year goes by, we all say, "I can't believe it is.....fill in the blank...already!"
Although I really do enjoy all the little things in life (Mr. Robert Brault!) and savor as much of each day that I can, life just gets in the way sometimes of our "plans." It's kind of like watching or listening to the weather forecast for the upcoming week. Don't bother making your outdoor plans according to those predictions. They usually change.....
Case in point: About six weeks ago, neither Ron nor I could have predicted what our lives would be like during these first few days in June. About a month ago, Ron had part of his right lung removed due to a cancerous "nodule." The surgery was successful and there was no chemo or radiation involved. Thank goodness! But during his recovery at home, he wasn't getting much better, and had trouble breathing. But when he went for his follow-up appointments to his lung surgeon and lung doctor (yes, two separate ones) both said things like: It takes time. You're doing all the things you're supposed to, etc.
Then, over the weekend of May 14th and 15th, Vern rapidly got sicker and our vet said without a doubt we were making the right decision to say goodbye to our sweet, beloved, senior guy. As most of you know, we'd had Vern just over five years and he would've been 15 years old this August. Although Vern was our third dog, Ron bonded with him much more than he ever did with the first two, and it really hit him hard. For me...I'm grieving about the same as I did for our other two, much-loved fur babies. I have my good days and my bad days.
So, a couple more weeks went by, and I kept telling Ron I thought he had pneumonia. I've had it enough times in my life to know the sounds and symptoms. It's not "normal" to wheeze and rattle when you breath! But, did that happen when the doctors listened to him with their stethoscopes? Of course not. One of them looked at me a bit patronizingly at that point, because I had voiced my "knowledge" but he wasn't "hearing" it.
....................................................... To Be Continued ...................................................
﻿
at June 04, 2016 5 comments: