I've blogged previously about my clumsiness; falling down steps, bumping into furniture, and tripping over this or that. Well at 6:30am this morning, when Vern and I were outside, I fell and... 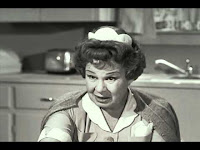 as Hazel would say, it was a doozy! 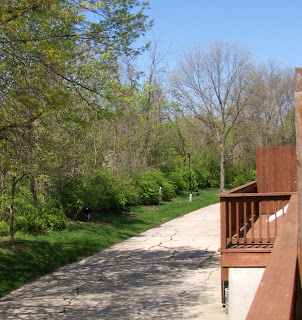 I took this picture from our deck, earlier this year.
Do you see that tiny little silver spec in the grass? 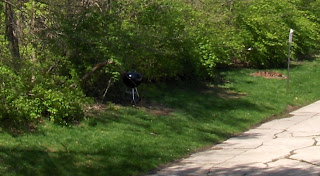 Same picture. Cropped closer.
Do you see it now? 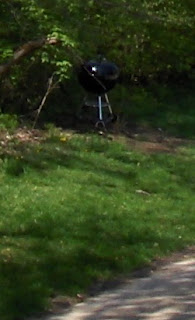 Same photo again. Cropped even closer.
Yes, there it is. The Culprit.


This is the drive-way & parking lot behind our townhouse. The decks are over the garages, and we have a beautiful and private view. Vern and I have walked along, and up and down, that little grassy hill zillions of times. He always knows when, and how to, back up and out of an area. Normally, if he sniffs too close or behind that BBQ grill, I pull gently on his leash, and he then backs out and trots along the front of it. 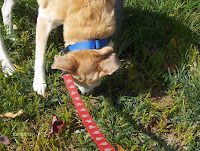 Well, this morning he was quite a bit behind it, in the shrubs. So I decided to pull him out of there, but on the back side of the grill. He got confused and turned the other way, and so before I could lift the leash up high enough, he and I kind of "clothes-lined" the grill!

As it began to roll down, I tried to stop it, and somehow slipped or tripped, bounced around a bit and fell down the little hill, landing on my back and derriere on the hard concrete. As that was happening, the grill's lid fell off and clanked, my glasses and baseball cap flew off my head, and my cell phone slid out of my pocket.

I sat there for a few minutes and knew I hadn't broken any bones, thank goodness, but my left knee and left arm hurt quite a bit.

I wondered if anyone heard or witnessed my tumble, but I really didn't care one way or the other. I was so glad I had on jeans, because I could tell my left knee was scraped and bleeding, and it would've been a lot worse with shorts on.

Vern and I walked home. I cleaned up my scrapes and crawled back into bed.

The Ronald wasn't a bit aware of it until a couple of hours later when he woke up and I told him all about my latest escapade, and added, 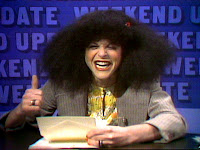