* I've had some really strange dreams lately. I seem to go through stages of consecutive nights of dreams that just wear me out & I wake up exhausted! And that's not good, considering I only sleep about 5 hours most of the time. These dreams aren't nightmares by any means, they just consist of weird events which semi -pertain to my past or present life; with people that I know or have known, etc. The strangest part about the last two nights' dreams is that they were kind of connected.......a "to be continued" kind of dream. I'm almost afraid to go to sleep tonight! Maybe I'll blog a little longer and then get back to writing my book...and see how long I can stay awake!

* Yesterday in the midst of doing a few errands, I realized I was getting a flat tire. I had to drive to the nearest tire place and get it patched. Although I was slightly aggravated for the time I lost, I was so grateful it didn't go completely flat somewhere in traffic! It was so cold and windy, it would've been quite ghastly, dahhhhling!

* My brother and sister-in-law live in northern Iowa and have been having a brutal winter....worse than usual, which is pretty bad! I received an e-mail from Alice today, saying that she and my brother were both off work today due to the weather. They live in a very small town and many things are within walking distance, but they've had snow, blowing winds, a bit of a thaw, and then refreezing, so many places were closed for the day. She said they read the funniest, most ironic piece of news on their local cable channel: "The Cabin Fever Open House at The Library is Cancelled."

"A positive attitude may not solve all your problems, but it will annoy enough people to make it worth the effort." -- Herm Albright
at January 26, 2010 9 comments: 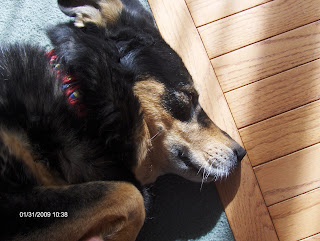 Today's weather consisted of quite a variety of conditions. When I first got up, there was a dusting of snow on our deck. It was the odd, tiny pellet, weightless kind. Off and on during the morning, the sun peaked out and then hid behind clouds, all the while, large snow flurries swirled in every direction. The wind was cold and sharp and almost took my breath away a time or two when I let Tiger out the patio door. By afternoon, the snow had melted from the deck, the sun was out in all its brilliance, and Tiger layed outside on the driveway, but for just a little while though, because the temperature was still way too low.

All of this reminded me of the picture I took of her last year, basking in a sun ray. Her body was on the family room carpet, and her nose was on the kitchen floor. Voile' Here is that picture! It was taken almost exactly a year ago, and certainly fits right in with today's blog.

“Today a new sun rises for me; everything lives, everything is animated, everything seems to speak to me of my passion, everything invites me to cherish it” -- Ninon de Lenclos
at January 26, 2010 14 comments: