Note: None of the following is an April Fool's Joke.
If you have your volume turned down when reading my blog tonight, you're missing a beautiful song by "Three Dog Night". It's called Pieces of April and it's one of my favorite songs. And, for obvious reasons, it's the only song on this particular Play List! I'm not sure when I'll change back to one of my other lists, or make another new one, but enjoy it while you can!

Speaking of April and Beautiful.....we have had the most extraordinary weather the past couple of days. High temperatures in the 80 + degrees both days. The flowering trees and bushes are popping their buds like popcorn! It looks like we'll have pleasant weather on Easter, which hasn't happened in years! I can't even remember the last Easter when people weren't wearing their winter coats over their new Easter outfits! We're having our family Easter get-together this Saturday, which is the ONLY day where rain is predicted. Oh well....we all know how these weather people are, right?!

I heard from Michael Lee West today and the book she is sending for our prize winner, Alice, is a copy of her debut novel: "Crazy Ladies". I've read that one and loved it, so I'm sure Alice will, too!! Congrats again, Alice!

As of today, I'll be on hiatus from my job at the Adair County Free Press. I've been writing a weekly column there for 2 years, and just asked if I could take some time off to get my book completed. Fortunately, Linda, the owner totally understands and said, "of course". I think that will help a lot to stay focused on my book and have one less distraction. The majority of you have never read my column because the Free Press is not online. It's a small Iowa newspaper that still lives on in Greenfield, Iowa.....home of my parents and maternal grandparents. Greenfield is so special to me and I've written about it many times. It's my own personal Mayberry!

I'm feeling especially emotional this evening. I think it has to do with two things. One is the very serious illness my friend, Angelo, has and his upcoming surgery. (Many of you already know about this because of my prayer request e-mails.) The other one is that April 1st holds joyous memories for me. Twenty three years ago today, April 1st - 1987, I phoned all my family, long distance, and said these words: "This is NOT an April Fool's Joke. I am pregnant!" My son, Mark was born about 7 months later, in October. When my husband, Ron, and I were married four years earlier, we'd both been previously married. He had two sons, and I had one. We hadn't planned on having a "Yours, Mine & Ours" family, especially since the three boys were all teenagers! Ah, but there was a different plan....somewhere....somehow. And Mark has always been such a joy. One of my stories accepted by Chicken Soup for the Soul, is about my surprise pregnancy and the health problems Mark had when he was born. The title of it is: A Joyous Journey. It's in the New Mom book that came out in 2007. He's always been a great guy, from baby to toddler to teenager to man! He graduates next month from Washington University in St. Louis, with a Bachelor of Arts degree in Philosophy. Am I a proud mom....or what?! Oh, one more thing. How appropriate that I received an e-mail this evening stating his commencement annoucements shipped today! * Note:  After re-reading this the morning of the 2nd, I realized the way I worded Mark's health problems when he was born, made it sound like it was something permanent, which it was not. It was definitely a scary time for Ron and me, though. We had to leave Mark at the hospital for a couple of days when I was discharged, and that was so difficult to do!

* Also, since Susan asked about reading my story, I googled it and found it online. You can read it here, if you are interested. Chicken Soup story: A Joyous Journey.

Happy April 1st! Since my mama didn't raise any fools....well, that's debatable.....Don't let anyone play any tricks on you today.

For those of you that are waiting with bated breath........the winner of my latest blog contest is.....Alice! Thanks so much to the 10 people who entered! If you didn't win this time, never fear, there will be more contests all year long.

Alice is the lucky recipient of an autographed book by Miss Michael Lee West! Congratulations! As soon as I know which book it will be, I'll let you know. And this is Not An April Fool's Joke! Alice, you are the winner! 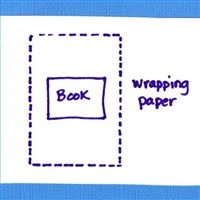 I thought the above diagram was a riot! It's on a "How to" site...and how to wrap presents. Who doesn't know how to wrap a book??!!