I heard a while back that Carole King and James Taylor are touring together, and I thought What a scathingly brilliant idea is that?! She's a fabulous song writer and singer, and he's a pretty good singer and had some hits with songs which Carole wrote!☺  (St. Louis is one of the cities on their tour and I really hope to get tickets!)

Whenever there's a conversation with or about Carole King, her album "Tapestry" is always discussed. It came out the year I graduated from high school.....1971. (yeah, I'm that old!) I bought that album, (one of a few I actually purchased, because I usually just bought 45's). I think all my girl friends and millions of others, bought that album that summer. We played it over and over and over. It was the soundtrack of our lives.

And so, in honor of Carole King, her album "Tapestry", the summer of 1971, AND... my high school graduation, I share this picture with you. (Hey...notice my goofy face! It's the same look in my Profile Picture...only 39 years ago...and different glasses!! Guess I haven't really changed that much, huh?!) 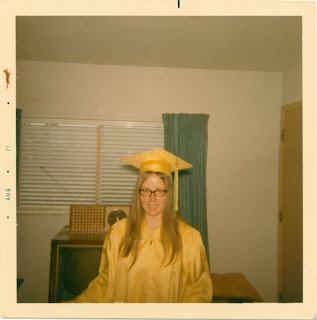