* Remembering My Dad on His Birthday *

Those of you who've read my blog for awhile, know that my dad left us when I was a young girl. I have many memories, both happy and sad, but I won't go into any of the sad ones today. 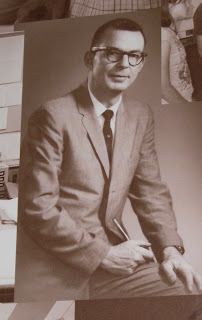 This is how I remember my dad in the early 1960's.
I want to highlight his intelligence: His years as a student at Parks College in Cahokia, Illinois, and his years of teaching there, immediately following his graduation. He taught kinetics, which I had never heard of until last year when my husband, Ron and I attended Homecoming at SLU. Parks College has always been part of SLU- St. Louis University, but was in a separate location across the Mississippi River in Illinois, until 1997. 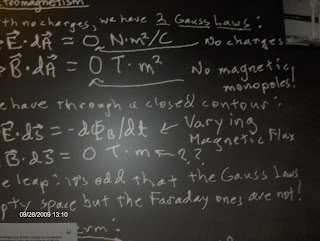 (photo I took of a wall of memories in the Timeline Exhibit)
(This probably isn't "kinetics", but most math problems look the same to me: a foreign language!) Parks Air College, as it was known in the beginning, has a wonderful, rich history of aviation.
I'm pretty sure it is still the place to attend for aeronautical studies....in the entire world. 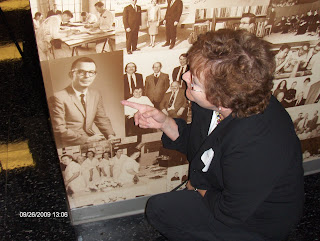 This is my favorite photo from our visit last September. There are several walls covered with former and current professors' and other employees' pictures. I provided this one to be placed on the wall. (That's me, crouched down and pointing at it. I was thrilled to see my dad included among so many. This photo was placed in two separate areas and I was so glad neither was too high for me to see!)
Today, Parks College is known as: Parks College of Engineering, Aviation & Technology. It has such a rich and interesting history. Besides the fact that my dad, James G. Lewellen, attended and taught there, the very famous Gene Kranz of Apollo 13 fame, also went to Parks around the same time as dad. 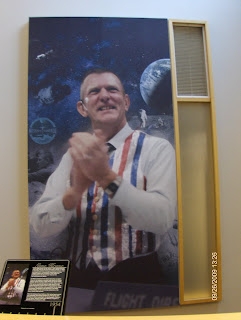 I took this photo of a huge poster of Gene Kranz.
Ed Harris played Mr. Kranz in the movie, Apollo 13.
Happy Birthday, Dad. Although we spent many years apart, if it wasn't for you, I wouldn't be here today. I wouldn't be the person I have become. I wouldn't be a writer. I wouldn't be me.
"In mathematics, you don't understand things. You just get used to them." -- Johann von Neumann
at August 11, 2010