I'm participating in a brand new meme, Book Blurb Friday, hosted by Lisa Ricard Claro over at Writing in the Buff. Lisa supplies a photo to be used as the book cover of an imaginary book. Those who participate are to give the book a title and to write a blurb of 150 words or less, in an attempt to entice readers to purchase the book.This is Week Two and I had a lot of fun taking on this challenge! 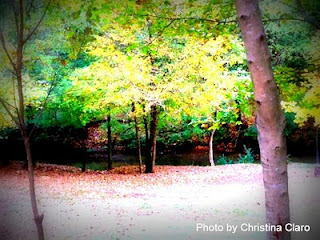 Alone, frightened, and feeling lost among the shadowy trees, Barb felt perspiration trickle down her back. What made her think a walk in the woods would clear her head? The only result, so far, was her realization that she had no navigational skills. She should stick to what she enjoys and what she's good at….sitting and reading.

As she continued to wander, so did her mind, analyzing her last conversation with her dad. Why had he said those things? What did he hope to prove?

Barb stumbled over a small, rotting log, barely keeping her balance. She began to cry, out of fear and anger and hurt. After steadying herself, she looked ahead and noticed sun rays streaming through the leaves. Running toward the dazzling light, joy and relief spread through her body like ripples in a stream. There in the brightness stood her dad.
(145 words)
at March 11, 2011